This Year in Press!

Posted on February 23, 2018 by VaniS Posted in Vani Sayeed Studios

Hard work pays off! And what’s better than being recognized for that effort? Our work has been featured in a bonanza of print, online and video spots over the past year, and we’ve picked up awards for some of those spaces, too.  Scroll on… 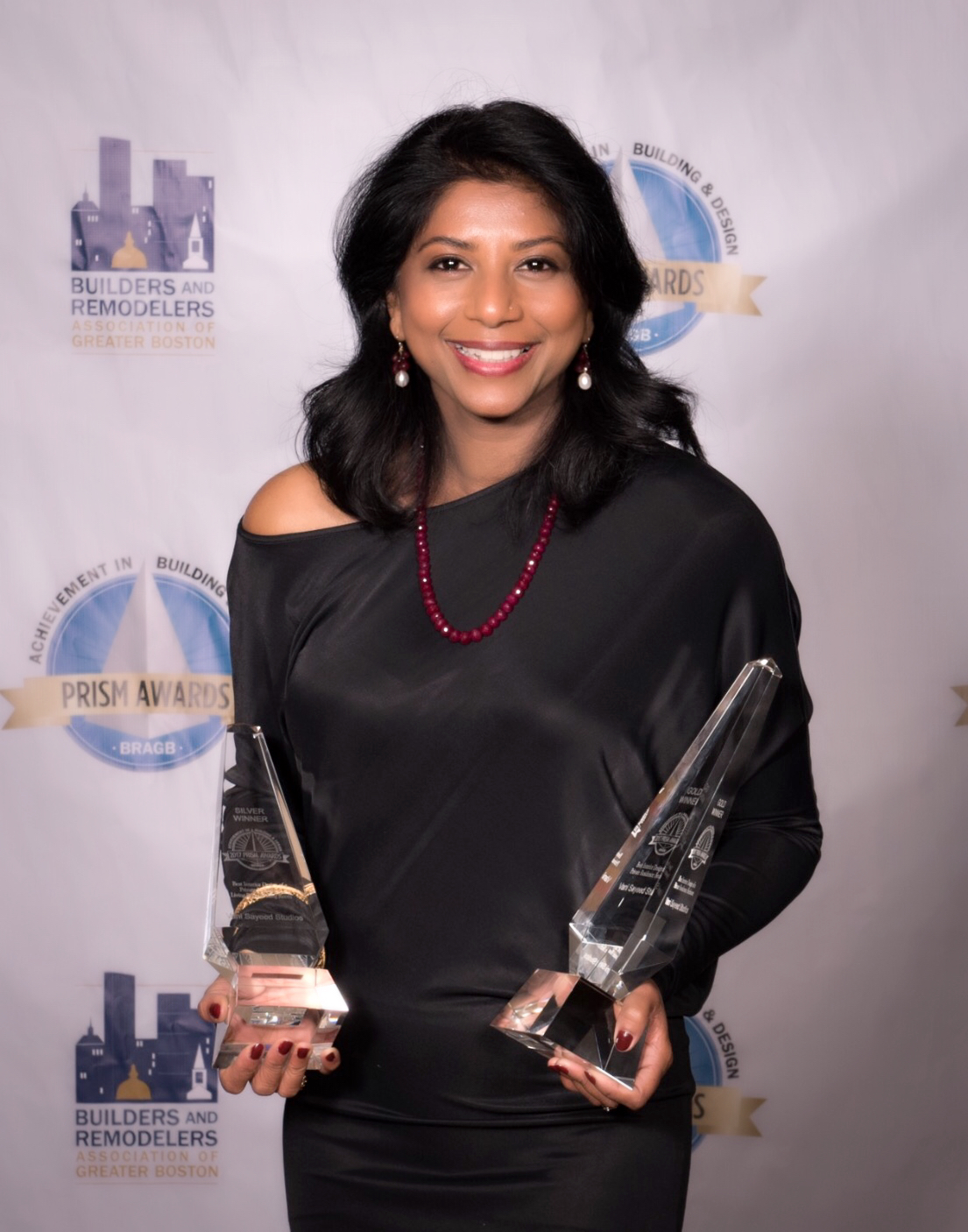 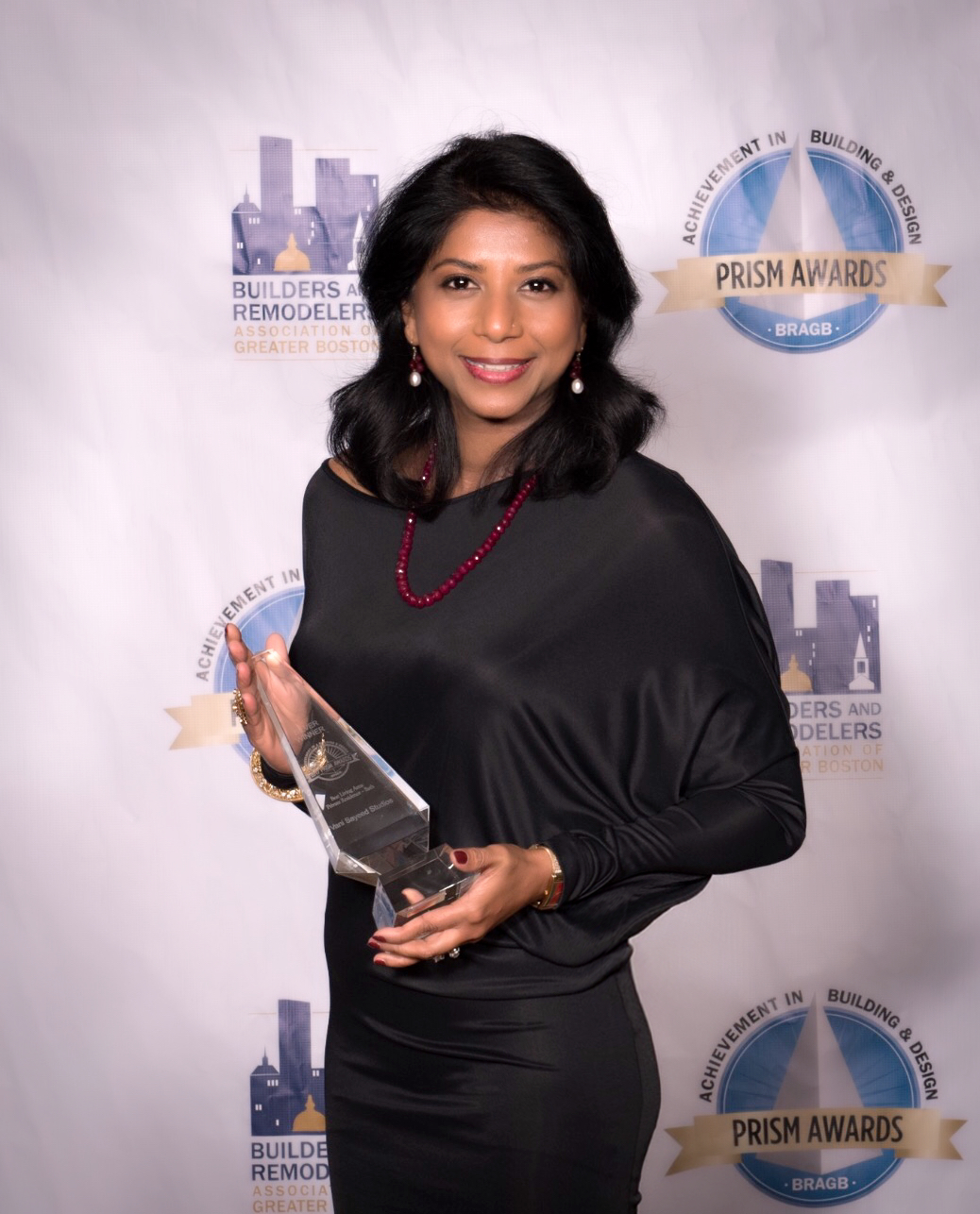 Everybody loves a shout out – and three are even better! In October 2017, I received three PRISM awards – love these babies!

First of the year was Design New England’s coverage of my kitchen design ‘La Belle Cusine’ for the Junior League of Boston’s Designer Show House.

‘The Red and Gray color scheme anchors the kitchen that, thanks to the removal of a ceiling is dramatically tall. The X base of the small central table echoes patterns in the floor tile and back splash behind the stove.’ 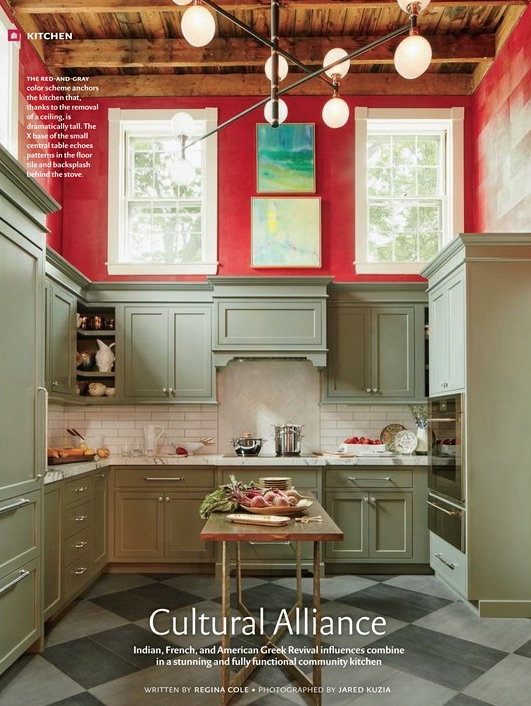 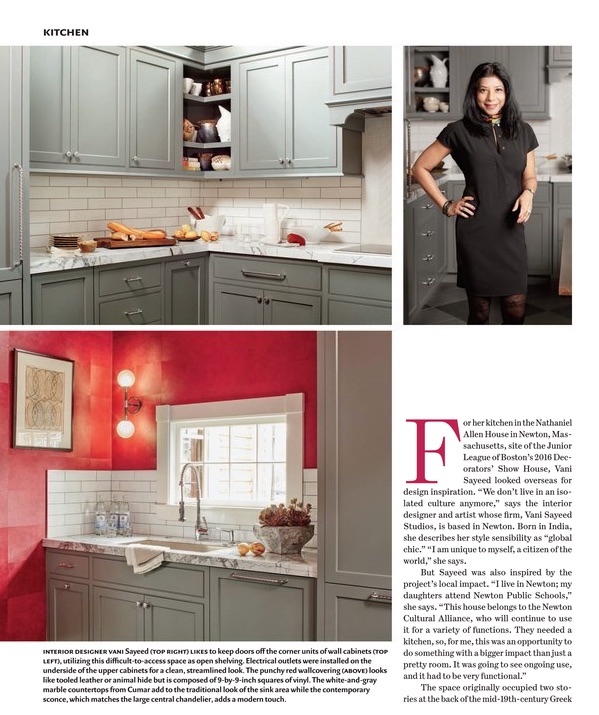 I could not have been happier with the way it turned out. The money raised benefited Newton Cultural Alliance, a consortium of arts and cultural organizations based in my hometown of Newton.

The May/June Design New England featured an amazing project – this stunning house designed for a globetrotting family made for great reading!

‘The design direction was to create a layered look so that the décor seemed collected over time. Preserving the architectural details of this 1920’s Tudor Revival house while meeting the needs of a 21st centaury family was important.’ 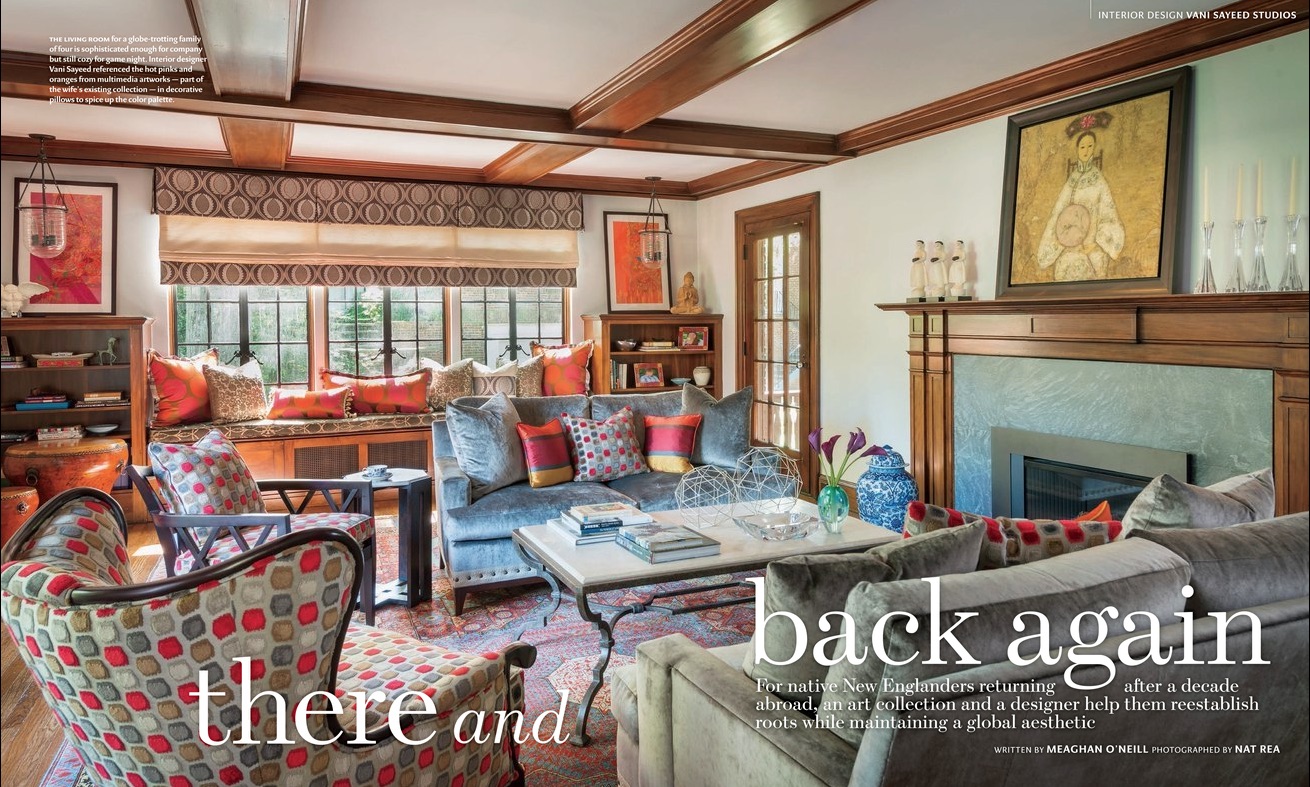 DNE highlighted some pretty vignettes in this eight page feature – they really show off the ‘global chic’ vibe! 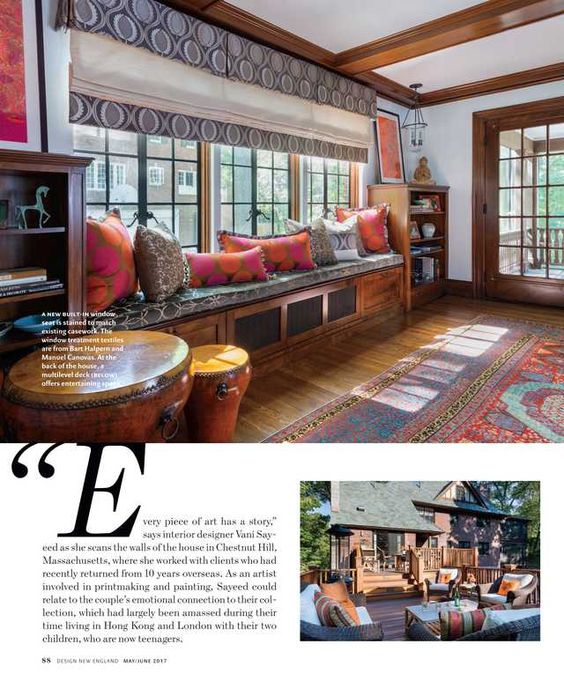 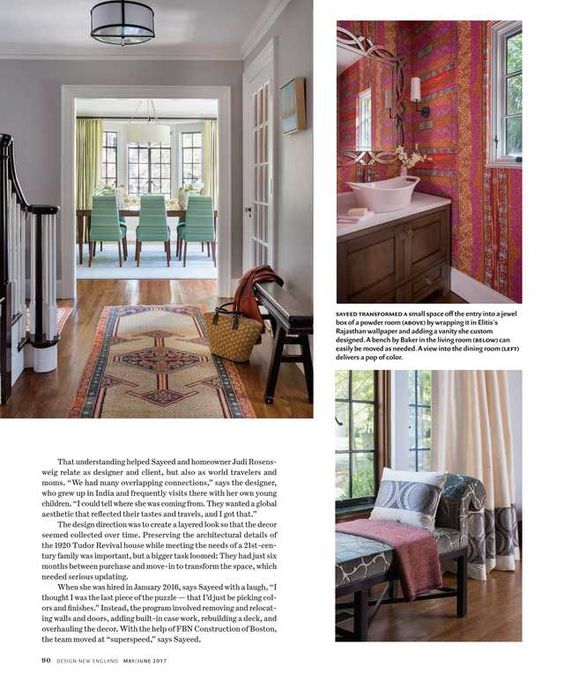 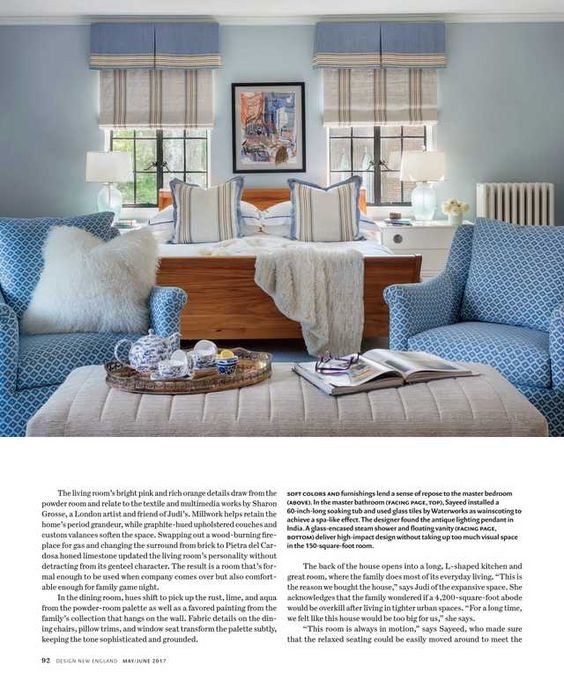 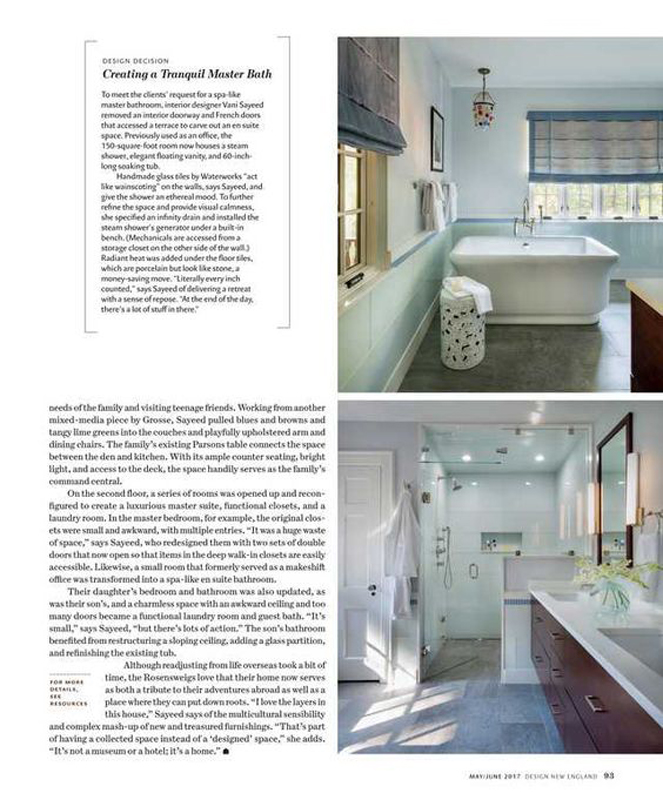 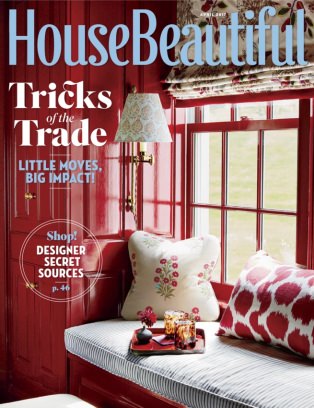 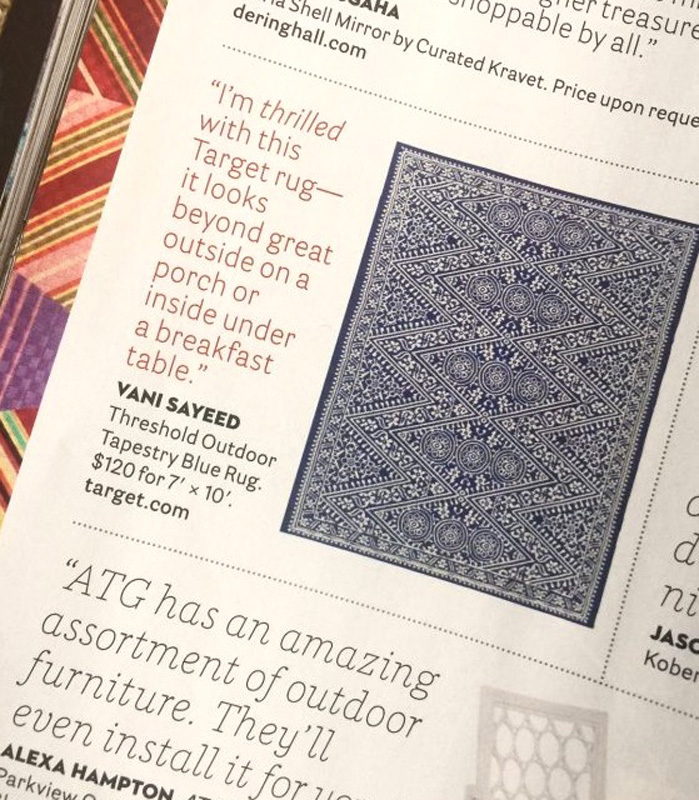 My thoughts on how to jazz up a bathroom appeared in House Beautiful magazine’s June 2017, Small Space issue – H2 Whoa! 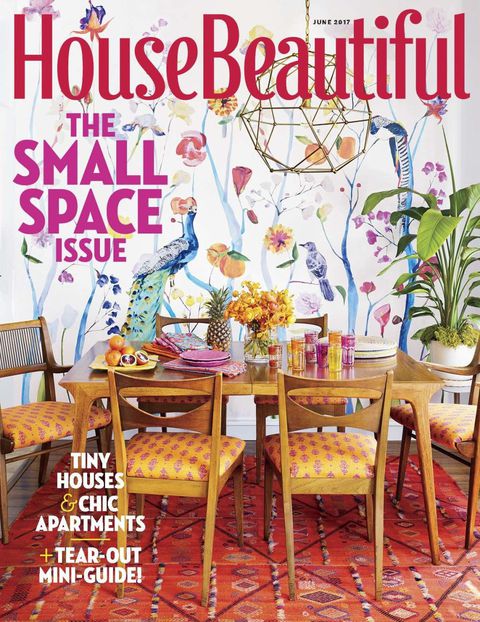 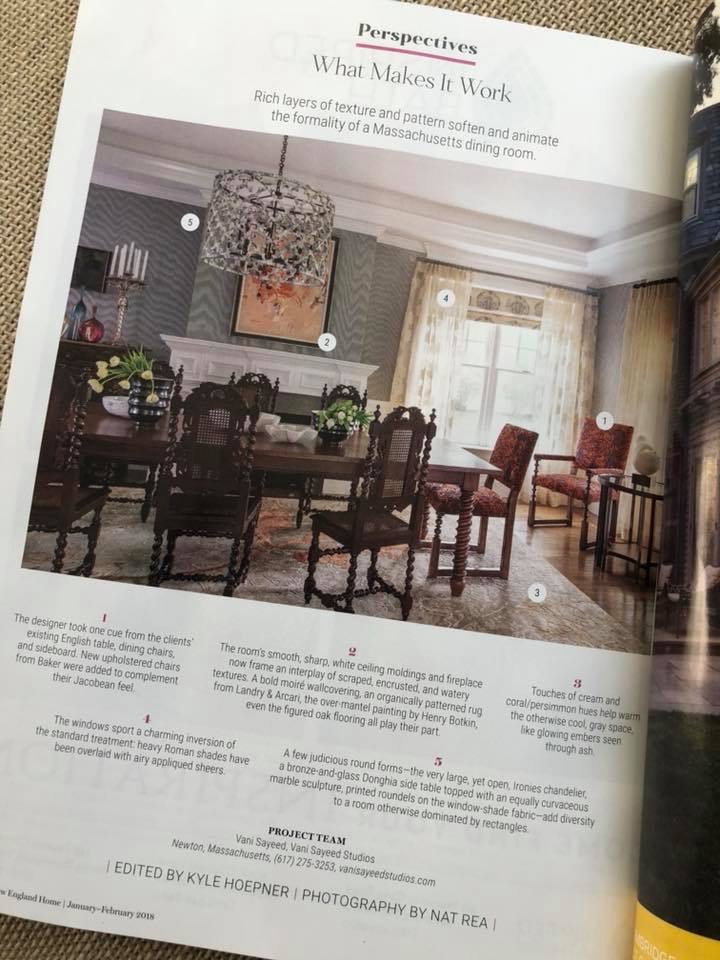 I was delighted that New England Home chose to highlight this stunning dining room in the January/February 2018 issue. It’s all about ‘Perspectives’ and what makes it work.

‘Rich layers of texture and pattern soften and animate the formailty of a Massachusettes dining room.’ 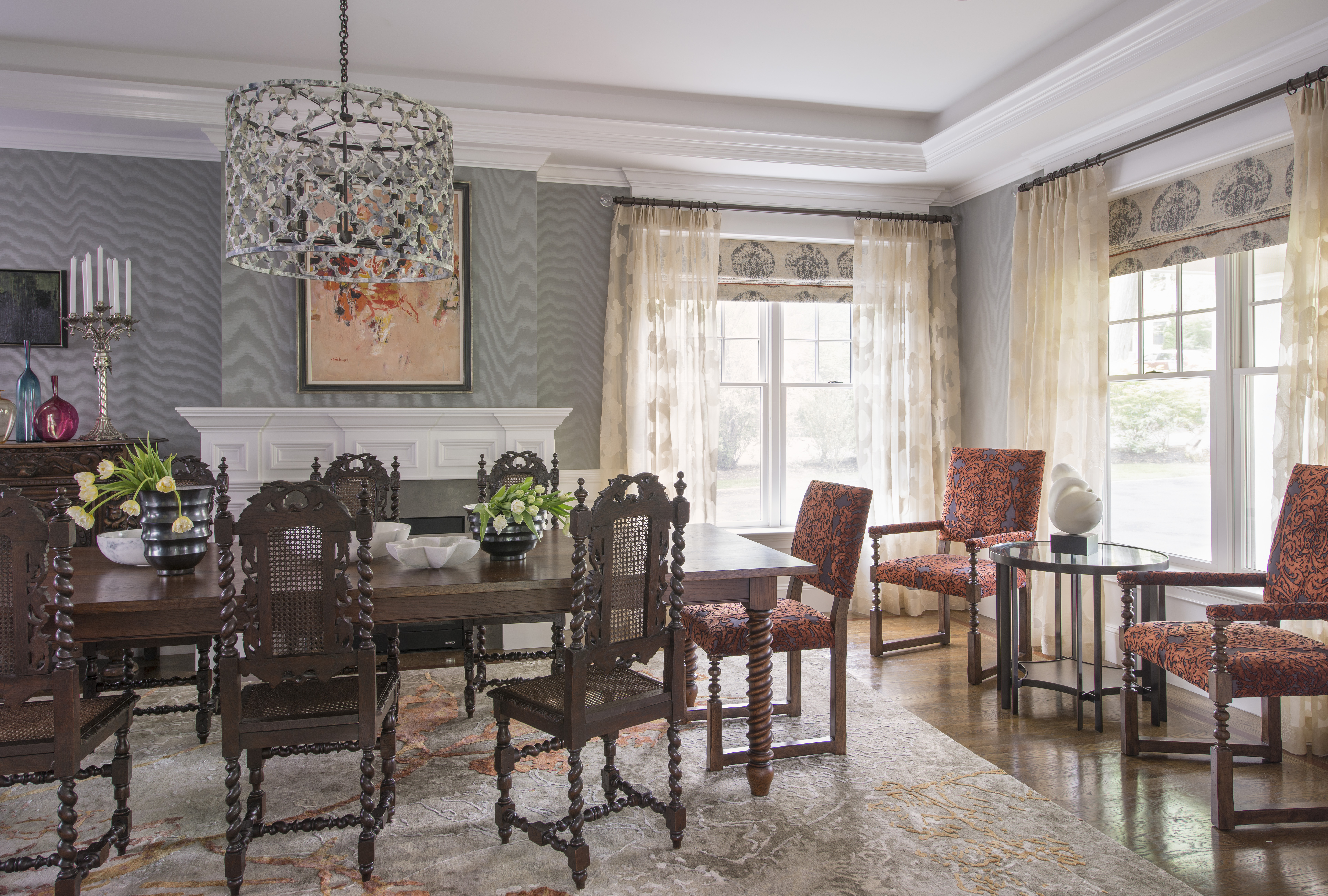 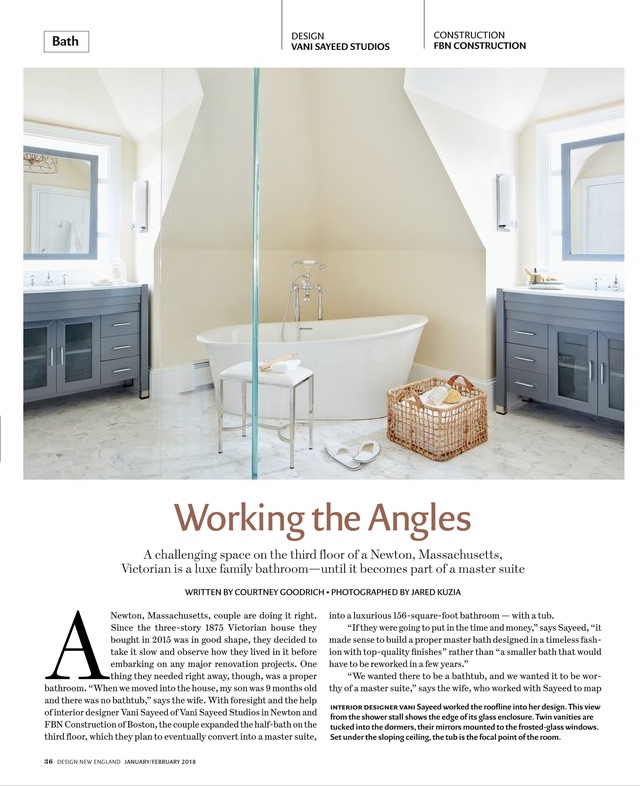 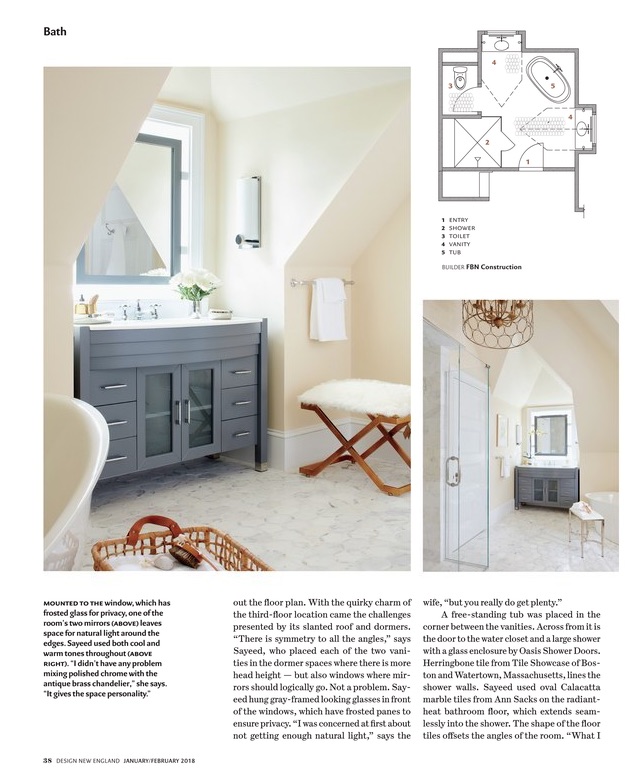 And for a beautiful and serene start to 2018  – our luxurious master bath design for a young Newton family, featured in the January/February issue of Design New England.

‘A challenging space on the third floor of a Newton, Massachusetts, Victorian is a luxe family bathroom, until it becomes part of a master suite.’ 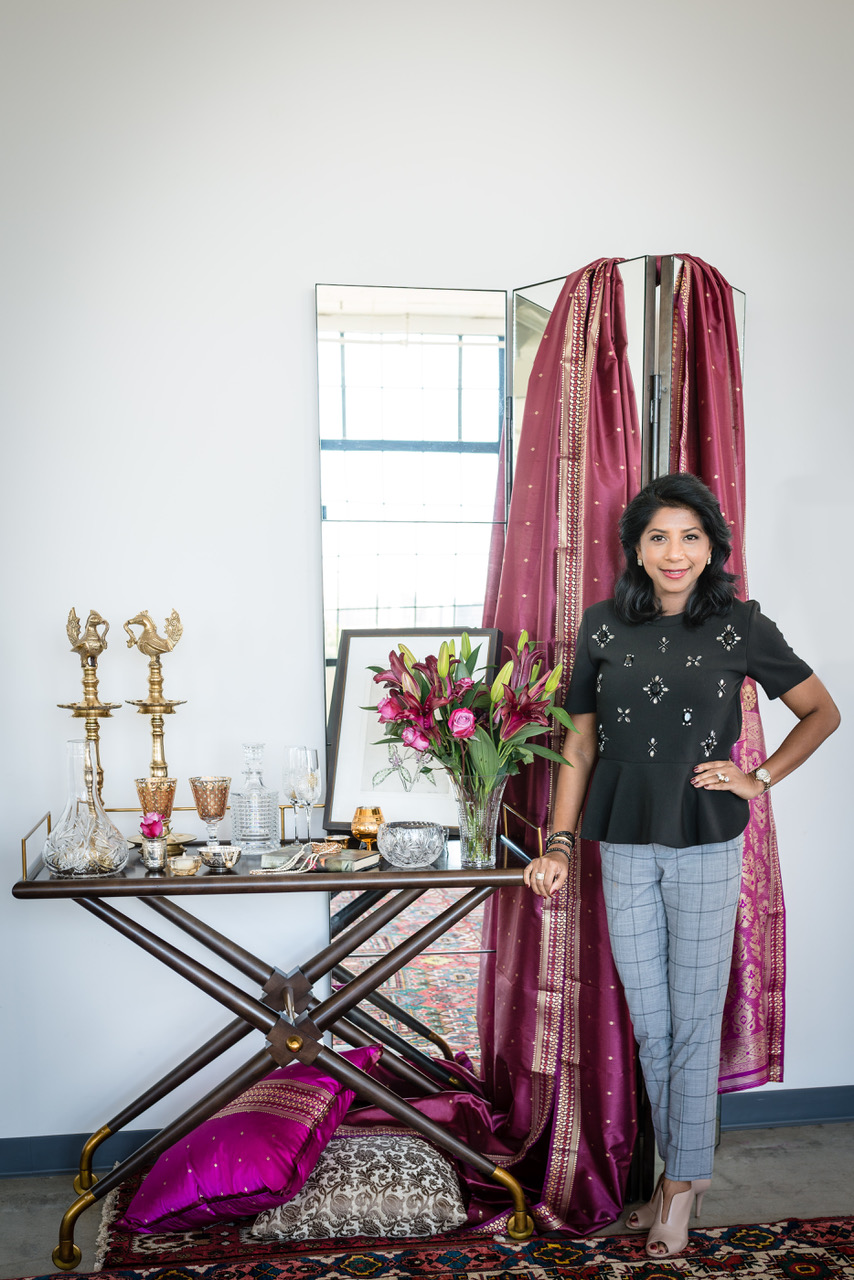 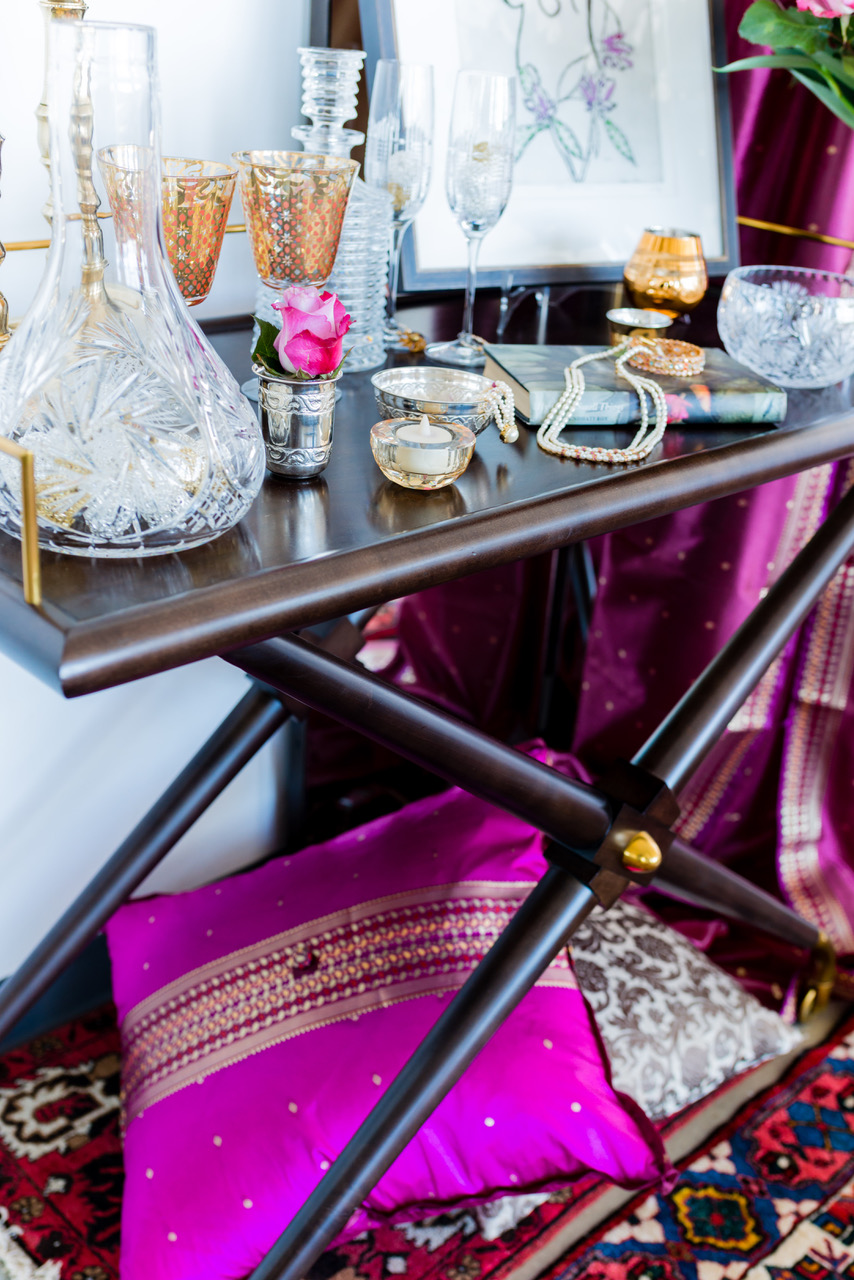 In other media, I got to flex my video muscles in this interview with Editor at Large.  It’s great coverage of Heading Home for Dinner, the design industry fundraiser for Heading Home, an organization aimed at ending family homelessness. 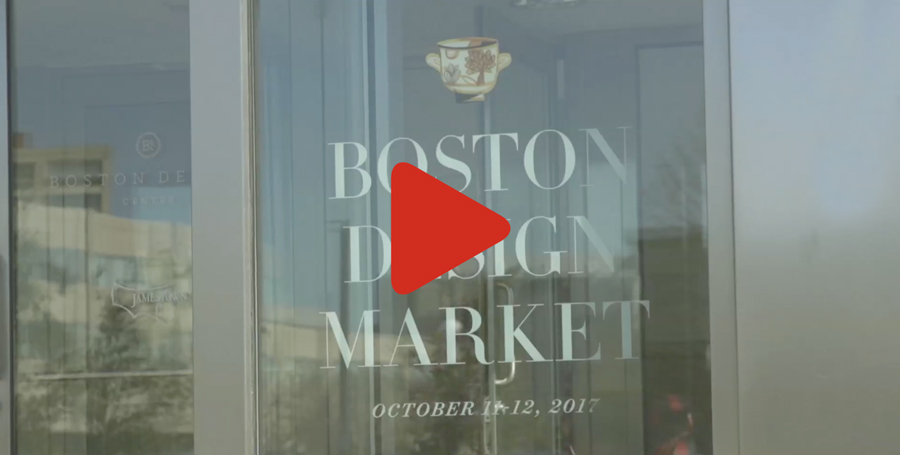 Last but not the least it was wonderful to have several online media reach out and show case my work and ideas – Boston Voyager, Designer Bath, Boston Globe and Dering Hall to name a few.  Also, I received Best of Houzz 2018 for Design and Service.

Dering Hall did several features on us including an entry way for ‘Designer Spotlight’ and this bold powder room. 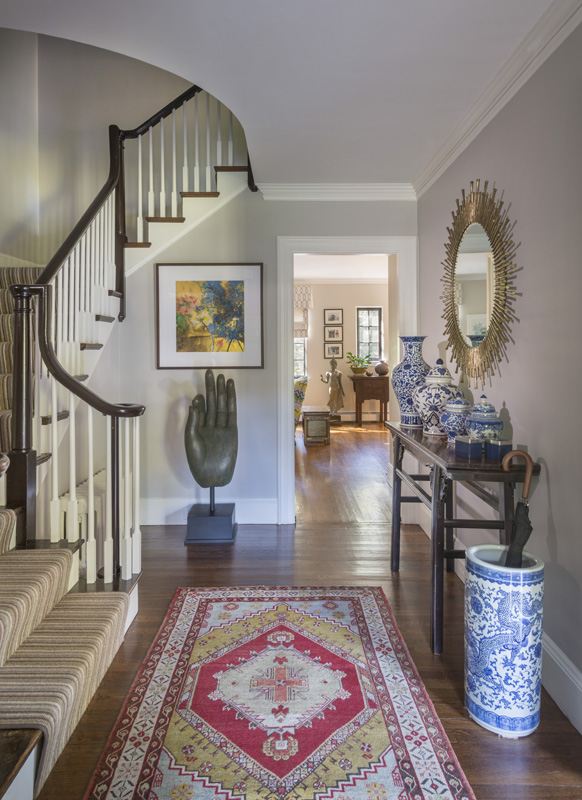 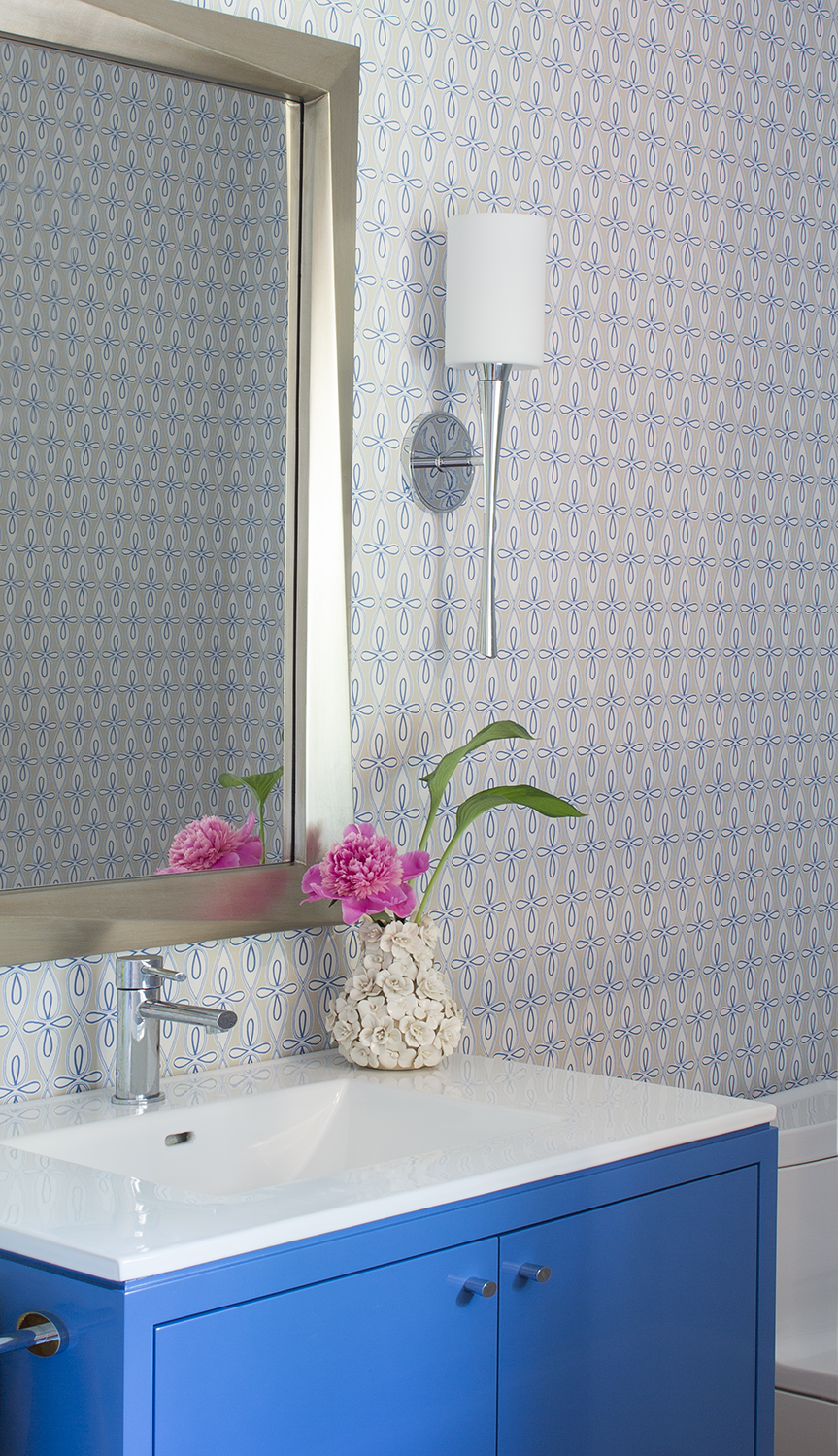 And to wrap it all up, we are totally excited to move into our new digs on March 1st – we’ll be at 1121 Washington Street Suite 2 Newton. Stop in and say hello! xoxo Vani